PubCoder allows you to easily enrich your content with interactivity by defining a series of actions that each object can perform in response to some events, like a tap on the screen or device shaking or tilting. Actions can be combined in lists using a very simple form of visual programming: each action is represented by a “brick” that can be chosen from a menu, and the various bricks can be placed in the list one after another or sticked together, so that they will be performed at the same time.

The Interactivity panel, at the right of the project window, can be used to define the behavior of the selected object. When an object is selected, the list of events related to that object is displayed on top of the control. Those are the starting points to let the object react with some actions. Some events are more generic and usually related to direct user input (e.g. tap, swipe), some are more specific to the object (e.g. a quiz was completed successfully).

Selecting an event (e.g. Tap in the picture) displays the corresponding series of actions that will be executed when the event occurs. If the event already contains some actions, the number of contained actions will be displayed at left of the event name (e.g. 7 in the picture).

Once an action was added to the list, its properties can be defined on the stage and in the action inspector in the bottom part of the Interactivity panel: for example, when you add a Move Object action, you can drag the anchor point on the stage to select the destination position of the object while the duration of the movement can be defined in the action inspector.

Actions in the interactivity panel can be dragged to re-arrange their order of execution, and can be also “attached” one to another (like the two Hide Object in the picture above) to be executed at the same time as opposed to one after another.

Some actions can target any other object on the page to change their appearance, e.g. moving, rotating, scaling, fading them or bringing them to the front or backwards. Other can act on specific objects: play or stop a video, an audio or a frame-by-frame animation, switching the text of a text box or the image if an image object and so on. There are actions to change page, open a URL, run JavaScript code, apply CSS classes and other that allow to loop or run a group of actions and more. The combinations are really endless, and we keep on adding something new very often. See Generic Actions below for a list of common actions.

Whatever the action you use, you can quickly preview the entire page clicking the Preview button in the Project Window toolbar.

To remove an action, simply select it and hit the minus (-) button. Also, for each event, you can use the button at the bottom-right of the list to decide if an action list should be performed whenever the event is fired, only the first time the event is fired or never. 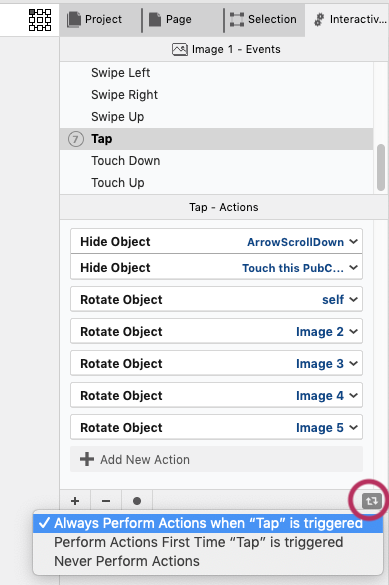 Most events are generic to the vast majority of objects, most of them happen in response to user action, such as touching the screen or tilting the device. Here we describe these generic events one by one. For a description of object-specific events, see the help page for each specific object.

The user gesture of moving the device in the space; accepts only Float Object action.

The user gesture of dragging an object over the screen; accepts only Drag Object action.

The page was loaded and is being displayed on the user device.

The user gesture of simultaneously moving two fingers outwards on the object on a mobile device (on a desktop computer, it is raised when the user double-clicks on the object).

The user gesture of simultaneously moving two fingers inwards on the object on a mobile device (on a desktop computer, it is raised when the user double-clicks on the object while pressing the alt key).

Warning: This event is only supported on XPUB, iOS App and Android App exports

Warning: This event is only supported on XPUB, iOS App and Android App exports

The user is shaking the device in the space.

Event raised when the object is displayed on the page, either because the page loaded or because the hidden object was shown by another action

The user gesture of swiping the object downwards with its finger (or dragging with the mouse).

The user gesture of swiping the object to the left with its finger (or dragging with the mouse).

The user gesture of swiping the object to the right with its finger (or dragging with the mouse).

The user gesture of swiping the object upwards with its finger (or dragging with the mouse).

The user gesture of touching the object with its finger (or pressing the mouse button with the cursor over the object).

The user gesture of raising the finger up while touching the object (or releasing the mouse button after it was pressed on the object).

Most actions can target any other object on the page, to change their appearance or layout. Here we describe these generic actions one by one. For a description of object-specific actions, see the help page for each specific object.

Hides an object on the page, with or without a fade out effect

Shows an object that was previously hidden, e.g. by a previous Hide Object action or having its hidden property enabled

Moves an object on the page in a rectilinear direction. You can use the handle on the target object to move it to the desired position on stage, or define the X,Y movement via properties

Rotates an object on the page by a certain amount of degrees. You can use the handles on the target object to rotate it as desired and change the rotation origin, or define the rotation via properties

When added to the event handler of a Drag event, allows the user drag the target object around the screen, meaning that after touching it, the object will follow the user’s finger (or mouse cursor) unless the finger (or mouse button) is raised. Drop zones can be defined, with corresponding action lists that will be executed if the user drops the object on the area. It is also possible to define an object whose bounds will be used to limit the area where the drag can take place, so that the target object cannot be dragged outside of the area.

To define a drop zone, simply click on Add Drop Zone in the action inspector, then define the target for this drop zone and the list of actions to execute when the object is dropped onto the area. Finally, there’s a list of actions connected to drops outside of every defined zone.

Important: Drag Object action can only be used in a Drag event handler

When added to the event handler of an Accelerometer event, will make the target object float around the screen of the user’s device, following gravity and device tilting.

Important: Float Object action can only be used in a Accelerometer event handler

Switches the playback of the Read Aloud from OFF to ON or vice versa.

Important: Due to the way this is implemented to support EPUB3 (it is actually transformed into an ibooks:readaloud="startstop" attribute), this action must be placed alone in the action list of a Tap or Touch Down event, no other actions can be executed in the same action list

Tip: If you need control over the playback, use an Audio Object instead.

Adds a CSS class to the container (usually a DIV) of the target object, altrering its class attribute. See the Code Section to see how to define a custom CSS class via code.

Removes a CSS class from the container (usually a DIV) of the target object, altrering its class attribute

Assigns a value to a certain CSS property of the container (usually a DIV) of the target object, altrering its style attribute.

Applies a specific color to the background of the target object

Applies specific border settings to the container of the target object

Important: The border is applied to the container object, so it will always be rectangular, even when applying it to a non-rectangular object like a transparent picture with alpha channel

Applies specific shadow settings to the container of the target object

Important: The shadow is applied to the container object, so it will always be rectangular, even when applying it to a non-rectangular object like a transparent picture with alpha channel

Bring Back to Initial Layer, Bring Forward, Bring to Front, Send Backward, Send to Back

These actions allow to change the z-index of the layer of the target object, to bring it above or below other objects.

Go To Next Page, Go To Previous Page

Note: Since the reader will leave the current page when this action is executed, any subsequent actions in the same action list may not be executed

Sends the user to a certain page in your layout

Note: Since the reader will leave the current page when this action is executed, any subsequent actions in the same action list may not be executed

Opens the navigation menu of the reader app, allowing the user to modify reader settings or exit the reader

Warning: This action is only supported on XPUB, iOS, Android and HTML5 exports

Opens a menu that allows the user to switch language, choosing from the different language renditions included in your exports

Warning: This action is only supported on XPUB, iOS, Android and HTML5 exports

Closes the reader that is displaying the contents to the user, going back to PubReader or Shelf screen.

Warning: This action is only supported on XPUB exports displayed inside PubReader or Shelf

Opens a web page to the specified URL, in the current app or in the user favorite browser

Warning: Open in Browser option is not supported on EPUB3 exports